It’s been a while since I managed to get down to writing a Friday fictioneers’ piece. This one is inspired by current happenings. I’m not sure if it’s written in hope or fear or some mixture of the two.

‘This way, Sir.’ A command dressed up like respect. He’ll understand only half of that.

He talks. ‘Who was the architect for this place? I know a fellow-’

Behind them, the sun is gone behind the barred and bolted door. So, too, the howling crowds. This new light is sepulchral, pooling on the ground. He stamps over it.

‘Yes. Everyone finds their God in the end. Some people like Him to accompany them into the darkness.’

‘Horseshit. Trump’s had this God guy’s back for long enough. He’s on his own now.’

If you’d like to write your own 100 word story inspired by the picture, click here, or here to read other people’s.

For five summers the hill looked down on us. I imagined it chuckling to itself as, on nearby Port de Pollença’s beautiful white beach, we chased toddlers with bottles of sun cream, wiped small faces clean of ice cream and endlessly shook sand-encrusted raisins from bags.

But 2016 was The Year. No more nappies, pushchairs or My First Shoes. We assembled the children and announced a short walk before swimming. One of them – what a little star – said ‘hooray!’, one said ‘no way’, one asked if there would be ice cream, one looked as if she might cry while the not-quite-three-year-old carried on rifling through someone else’s handbag. We had a rethink and left the two smallest with Grandma.

Guidebooks describe the Puig de Maria as an easy forty minute climb. At the top is the sandstone Santuari de la Mare de Déu del Puig, a monastery and chapel dating back to the 1300s and dedicated to the Virgin Mary to plead protection from the Black Death. The Bishop of Palma ordered out the original inhabitants in the mid-1500s and different religious orders have used the place sporadically ever since. In the 1980s, twelve cells were converted to bedrooms for overnight stays by ascetics, peace-and-quiet seekers (possibly parents of young children) and those averse to ensuites, air conditioning and other fripperies.

Lined with pine, olive and holm oak trees, the path is patched with shade. It makes for hot, thirsty walking but the views are matchless: westwards, the Tramuntana mountains rise dark and rocky above Pollença town, while to the east, Cap de Formentor and the bays of Alcudia and Pollença give way to the blue expanse of the Mediterranean. The children enjoyed seeing “their beach” from this new viewpoint, although, it must be said, displayed similar enthusiasm for the biscuits my brother-in-law produced from his rucksack. 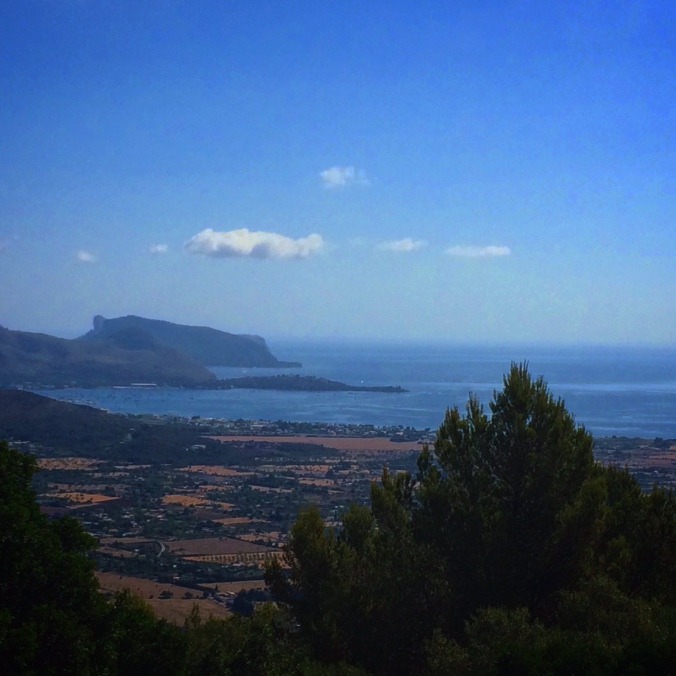 Starting as well-maintained tarmac, the path becomes rough cobbles closer to the top. Sturdy-soled though they were, I regretted my Birkenstocks (my only footwear option; I pack light) and wished for my trekking sandals, relics of another life. The children, however, scampered back and forth, probably covering twice the 2km distance, while discussing ice-cream options for the top, where there’s a small restaurant, apparently serving some of Mallorca’s best food, as well as that promised ice cream.

A goat, leaping across the rocks that flank this upper reach of the path, welcomed us to the summit. It posed for photographs, with the casual aplomb of the well-practised, before disappearing between the stone gate-posts. We followed, variously seeking shade, the incense-scented chapel and ice-cream. In our different ways, we were all disappointed. The sun was high and shade scarce to nil, both chapel and monastery were closed and locked and, despite a garish ice-cream sign, the restaurant, too, was shut. And yet, with air rich with resin, wood smoke and sea-salt, our hands gripping a warm honey-coloured stone wall – and, everywhere we looked, that incomparable view, it seemed impossible to expect more.